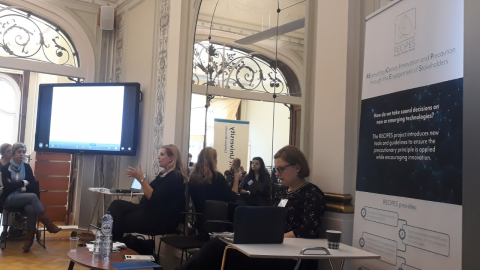 Nine months from the beginning of the RECIPES project (REconciling sCience, Innovation and Precaution through the Engagement of Stakeholders), the Consortium convened in Brussels to look at interim results and discuss the next steps.

Various project findings have been presented and discussed in detail by the Consortium partners. Furthermore,  critical input was provided by the Advisory Board Members, including  Howard Chase, Senior Director of Government Affairs for The Dow Chemical Company, Nina Holland from the Corporate Europe Observatory, Marian Schaapman, Head of the Health & Safety and Working Conditions Unit of the Research Department of the European Trade Union Institute (ETUI), and Christine von Weizsäcker.

The objective of the report on the effect of the PP, which is currently undergoing revisions, is to examine the effect and the application of the PP since 2000 by combining legal analysis, desk research and a narrative literature review, and to clarify the relationship between precaution and innovation.

Results from the media analysis on articles about the PP have been presented. The analysis covered how the public debate has been framed and how it has changed since 2000. The analysis has been conducted by the IASS, the University of Bergen and Maastricht University. Furthermore, the analysis looks at what values and presumptions European citizens have in regards to the PP. The analysis included articles from Le Monde, The Guardian and The Suddeutsche Zeitung.

Partners also reported from citizen interviews held in May/June 2019. In general, the participants’ view on precaution and innovation was that they were not in contradiction with each other and some consensus consisted of the need to look at innovation and precaution on a case-by-case basis.

As a next step, eight case studies will be conducted in the next months. These cover the following aspects: